It started with this: http://www.theartofcoachingvolleyball.com/individual-roll-ball-drill-with-genny-volpe/

Looking at this “drill” it’s hard to see the value for a volleyball player. If your player is running for balls in a match that are being rolled to them, have them take a full physical or better yet, introduce them to lawn bowling. Yet this kind of content gets spewed out weekly by volleyball entities just needing to fulfill a promise that they made to their subscribers: weekly content.

How about this one with similar value: https://www.youtube.com/watch?v=4UYtVG7je1s

Using buckets instead of arms. How much more time do you have implanting hardware items into your practices as a way of teaching passing then…say…you know....passing?

Here is another one that got the volleyball world talking a bit: https://www.youtube.com/watch?v=ciqYyspR6Mg

The very solid “Coach Your Brains Out” podcast featuring LMU Beach Coach John Mayer dissected this drill in their podcast: Creative (Crazy) Drills released December 3, 2015. They had the same opinion as many of you did.

There are programs like this which have so little to do with the sport you would be hard pressed to know it was a volleyball practice unless the balls weren’t visible: https://www.youtube.com/watch?v=MDkCMfQY9ag

As coaches, we are obsessed with finding the “new thing,” the thing that will separate our team from the one across the net. Maybe this way of training, or this drill will do it!

These are the example of the shiny thing. Many years ago, a volleyball magazine published an article about a two person serve receive. Predictably, the upcoming high school season saw several teams in a two man serve receive and just as predictably, they were shredded up by good serving teams.

This drill, these machines, those video series and yes, these volleyball sites that send weekly volleyball tips and drills: they all have one thing in common. None are non profit companies.

Young, beginning coaches or parents volunteer coaching at the local Y or Park and Rec, might think, “Wow, this college coach says she uses this drill so it must be good for my girls too.” This is the idea that is passed on as these companies send out their steady stream of content. But are they useful?

Motor learning science is adamant about Game-Like Reps in practice; better skill acquisition, better transfer and better retention. Chasing rolling balls across the floor while 10 girls stand and watch doesn’t come up a whole lot in the game. So why?

In the 1920’s George Mallory was asked why he was going to climb Mount Everest. He said simply, “Because it’s there.” A video drill or tip that doesn’t translate to the game, that goes against your motor learning practices or doesn’t fit the make up or age of your team doesn’t need to become part of your practice regimen “just because it’s there.”

Be selective with what you give to your athletes in practice and they will be just as selective giving back to you and the game.
Posted by Coach at 3:15 PM No comments:

Drive down Franklin Street in the middle of Chapel Hill, North Carolina and you’ll see the sign: small and pale against the expanse of one of the most prestigious Universities in the country but a milestone of the history of the site. The sign sits in front of McCorkle Place: a greenbelt in the middle of campus. It reads simply, “University of NC at Chapel Hill. First state university to open its doors. 1795. Chartered in 1789 under the Constitution of 1776.” 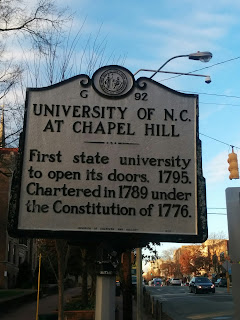 A few blocks from the sign sits the Dean Dome, the basketball arena where UNC plays it’s men’s basketball and named after Dean Smith, who as we’ll soon learn, had a bigger impact on great coaching in our country and beyond than any 100 coaches.

And down the road from there sits Charmichael Arena where UNC Coach Joe Segula’s Women’s volleyball team shares facilities with women’s basketball and just a few yards south across a small parking lot is Fetzer field which sits under the mindful windows of the McCaskill Soccer center which oversees a running track encasing the grass of this soccer and lacrosse stadium.

At the west end turn on the track is another signpost of history for the campus. 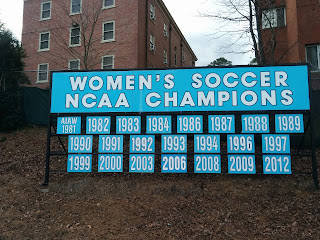 On the first Monday of the 2016, the University of North Carolina Women’s Soccer coach is running late. That, as it turns out, is nothing new. He greets us on the second floor  wearing a grey UNC long sleeve soccer fleece and grey sweats bunched up at his shins. He was heading to the weekly faculty soccer throw down, his invention out of his need to compete. His office is what you might expect of a Coach who is a whir of pushing and being pulled; chaotic disarray but was said to have been just organized.

Anson Dorrance sits behind the desk surrounded by notes, cards and letters, most that open with one of the following: Coach, Dad or Anson...

For those of us in coaching, his name is enough. His name is flecked with so many superlatives that if he was to be properly introduced at an awards dinner, your chicken would get cold.

He’s the architect of ‘The Dynasty,’ as Sports Illustrated called it. His office window looks down on the field and harkens the title of one of his biographies, ‘The Man Watching.’ His record: 22 NCAA National Women’s Division I Soccer Championships in 24 appearances, the refiner of the Competitive Cauldron, winner of the 1991 World Cup and an expert on not only coaching but perfecting how to coach women and men differently. He is “One of those Guys” that coach’s quote, talk about and reach out to: a resource for the coach of any sport who wants excellence from his athletes and settles for nothing less.

Just two weeks ago, Anson Dorrance was awarded the prestigious Werner Fricker Builder Award, the highest honor in U.S. Soccer. It’s for the individual or group that has dedicated at least 20 years to the sport, established a legacy in U.S. soccer and has developed programs that will outlast their own involvement in the sport. 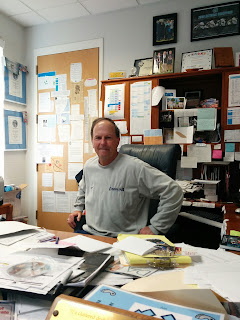 Dorrance spent a generous 50 minutes chatting about a number of topics. He is an English and Philosophy major and his ease of which he answers random questions leads one to believe he has done this before: a few thousand times before. There is no gristle; his answers finely tuned and efficient, much like the athletes he helps build.

At the end of the interview, Dorrance talking about his coaching philosophy tells a story about John Thompson, former protégé’ of Coach Dean Smith. His struggles forced a call to Smith and he talks about his issues; where he’s gone wrong, fishing for advice. Smith says nothing until after Thompson’s hour and a half soul cleansing and Thompson clearly annoyed with the lack of interaction from his mentor, Smith says to him, “You’re going to be okay John and the reason you are going to be okay is that you have taken responsibility for everything. The only way you can change anything is to take responsibility for everything.”

Dorrance smiles as the story shines a light on his personal philosophy. 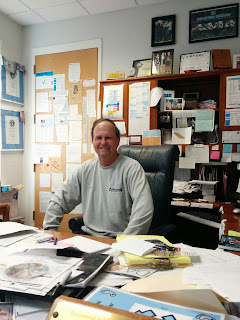 It’s at the end of the hall, the last door on the right; three floors up and down the hall where quietly, although not for long, some of the most important research to come out about feedback was developed, proven and sustained. John Kessel’s Grow the Game blog featured her work in his post two weeks ago and several members of USA Volleyball have taken notice.

Dr. Gabriele Wulf, a Professor in the Department of Kinesiology and Nutrition Sciences at UNLV and the principal researcher into external v. internal focus.

We reached out to Dr. Wulf and she was gracious and accommodating in our interview with her. Unassuming and humble, Dr. Wulf is open and confident of her research and where it will lead coaches going forward.

In the 38 minute interview, found here, Dr. Wulf talks about her research and where it is taking her and the world of training athletics.

In her own words, here is a sampling of what Dr. Wulf’s research has to offer.

“The definition of an external is a focus on the movement effect on the environment so typically that’s the ball that you are manipulating; hitting, throwing, kicking, whatever, as opposed to your foot or your hand that is doing the work so to speak. An internal focus is that, focusing on body movements that you use to… balance; when you tell a tennis player to focus on the swing of their arm, or a golfer, that would create an internal focus.”

“We use images which is another good way to promote an external focus.”

“One thing that is important to keep in mind is that when we are talking about external focus or internal focus, we are talking about the planning of the movement we are about to do. So what do we concentrate on when we’re about to execute a serve? That does not mean you are not aware of your body movements. I think that’s something important to keep in mind.”

“One of the interesting things happening in the brain when we think about the self and the body movements in this case, is that those activations in the brain tend to interfere with our movements.”

“Technique in sports is oftentimes complex but sometimes one little tip will elicit a much better technique.”

“Physical Therapists and golfers were among the first to really get interested in this research and I think golfers for an obvious reason: it’s so hard to hit a golf ball well so they always struggle.”

“In the feedback literature where the gist is essentially you shouldn’t get feedback very often. The reasoning behind that is that people become dependent on feedback when they get too much of it and they never learn to interpret their own feedback. I question that. There are other reasons less feedback is better: people don’t feel criticized all the time, that’s one. Also, we have shown in two different studies that when feedback is worded in an external way, more is actually better. If it’s worded in an internal way, then less is better.”

“In 2013, a review article was published for which I looked at all the articles out there and I couldn’t find a single study that showed the opposite: that in internal focus was better than an external focus. It’s so reliable.”

It’s time to climb on board coaches. This is a game changer of how we, as coaches, can get more from our athletes; more effective training and better retention of what we are coaching. And be sure to listen to the end for the unveiling of Dr. Wulf’s new research which is another game changer in coaching.

Thank you Dr. Wulf for your time with the Arizona Region.
Posted by Coach at 9:48 AM No comments: